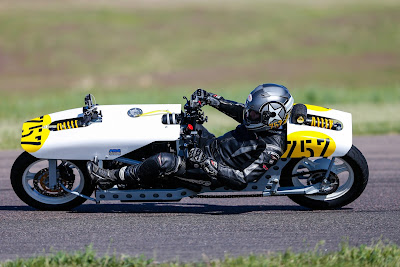 The Colorado Class on Sunday, along with the rest of the day, went very well. Only placed 17th out of 18, but shaved 6 seconds off my best lap time, with my final lap being the fastest. The race start went a lot better. The race didn't feel like it was too long this time, which also meant that I remembered to use the headrest and had no neck strain trouble. Almost pulled out of the race when the left exhaust baffle started coming off, but I really didn't want to DNF, so I grabbed the baffle while at speed  between T3 and T4, twisted it tight, burnt my gloves pretty good, burnt my hand a little, but was able to finish. The baffle never moved before and technically shouldn't (Yes, it was safety wired), but it did, and it will get fixed so it can't happen again. I won't describe how and where that malfunction initially diverted my attention... 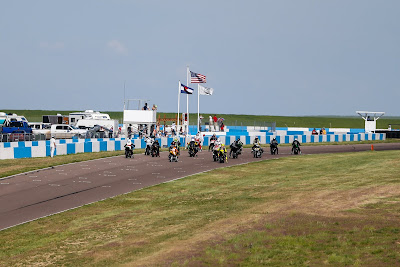 I'm still way too slow. But the long list of areas for improvement is getting easier to see and harder to resist. HPR is starting to feel like home - and that is a great feeling! I'm getting bored with my current pace and feel a lot better about: Getting my corner speeds up, not coasting up to my braking points ("It's like you're on final approach for landing in the corners!", one instructor said, and not in a complimentary way.), transitioning and driving through the chicane much more aggressively (Where the bike excels, but my nerve doesn't), working on my body positioning (I'm getting more comfortable moving around, but getting too comfortable about not moving enough), and better shifting technique (2 botched shifts can really rattle the concentration, but were probably caused by not concentrating enough in the first place). The tires picked up an awful lot of rubber at both ends, which means that they could be used a bit harder. Retreading one's own tires with the stickier bits of other racers' tires isn't a speed secret. 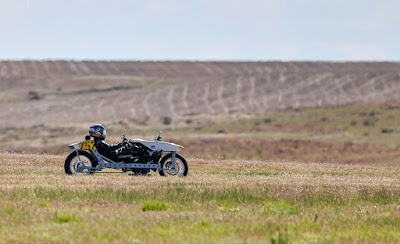 What I'm starting to refer to as Byers Syndrome (That coming down after the post-race high, where I get all resentful about my performance when driving home) was remedied by remembering that 6 second drop in lap times. Just think: If that can be repeated, I'll be competitive in ROR by the end of the 2015 season! Why, I might even be on the front of the official 2016 MRA T-shirt!! Isn't that great? No, that's delusional! Seriously though, getting into the 2:20s is now a goal I'm far more optimistic about for 2014 - something I was despairing about while approaching Byers the last time/first time. And 2014 is just prep for 2015. The EXperimental500 will make a lot more sense by then. 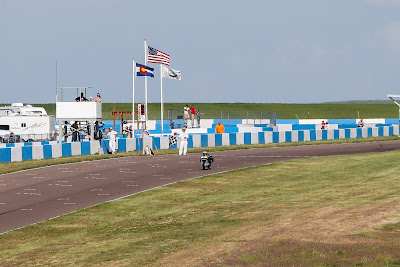 OK - this site is supposed to be about the development of the racer project, but until the new rear suspension is done, the most important project is developing the biodegradable guidance unit. But while this bike was getting built, there was never any doubt who was going to test ride and race it. Nobody has ever said: "Hey, I just built this roadracer that violates all design conventions, has an unproven front suspension with unproven steering geometry, and places the rider in an unfamiliar position, but while my mental test rider likes it, I don't know if it will work in the real world or will become unrideable at certain speeds and lean angles - would you like to have a go on it?" 92 laps later, I'm very happy with that hardware, enough to know that a vastly better rider should get vastly better results. So when an MRA multiple champion comes up and says that he'd like to have a go on it after the race, well, that made my day. Not sure when it will happen - or if he'll like it and offer to race it, or point and laugh afterwards - but that is a monumental step forward. 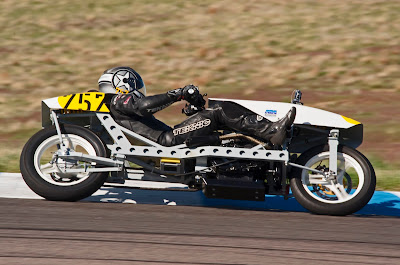 While this isn't a secret website about a secret project, I don't promote it much outside of forum signatures or Facebook, either. That made an unexpected call from Discovery Channel a very pleasant surprise. They expressed an interest in videographing the racer and other projects both at home and the track, which was a real honor! No details yet, but will post them when they become available. Round 2 photographs are easy to spot from the cluster of Go Pro video cameras they mounted on the racer! 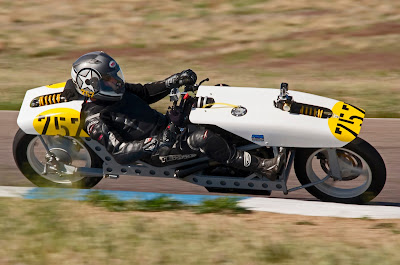 I used to joke that the real work involved with this project was going to start after the racer was finished. It isn't a joke anymore! So many years of dreaming/making stuff/testing (Repeat) went into this that I can't believe this is actually happening! It also wouldn't happen without the support of my wife, children, family, friends, everyone in the MRA, and so many more. Thank You!!!