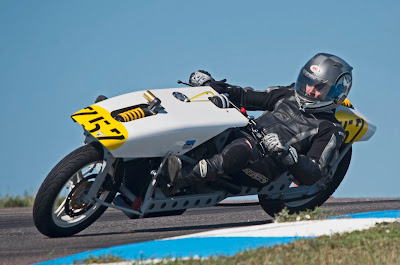 MRA Round 6 on Sunday 24 August at HPR, Colorado Class, started with a lot of enthusiasm. The first lap (From a dead stop) was my fastest lap, ever. And while I've finally been able to get my corner speeds up, (Mostly in Turn 1, where I've been able to slide it uneventfully a few times this month!), a much longer than anticipated slide on lap 3 told me I'm as close to the edge as I should get - time to get as smooth with that speed as I can make it!

My higher level of confidence got me going faster up Turn 7, where I knew I could make up some time. A little too much throttle and little too much lean angle/speed at the apex resulted in a lowside crash. My battle with gravity was a very easy one - it felt like I fell about 2 inches before I was completely on the ground. It was the battle with inertia that ended badly.

The footpeg broke when we hit the dirt, injuring my foot. NO injuries anywhere else. My helmet never hit the ground. The new isolated gas tank structure worked perfectly, even though the fairing is damaged. 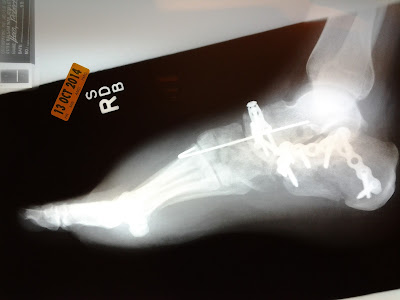 This was going to be my last race of the season, but it didn't end the way I hoped. As bad as that feels sometimes, enough was learned to make the next racing season much safer and faster. Faster and safer is always good!

The day was made better by the HPR staff who got us back to the Rat Van, and fellow MRA racers, track marshals, and enthusiasts who helped us get the Rat Van loaded. And best of all, the support of my wife and family - without them, I wouldn't be sitting here feeling this good about it.