A few months ago, I read an article on The Quail Motorcycle Gathering show for this year. Well, the old racer was never built for show (And never entered in one, either), but it sure is a great conversation piece. So a show application was submitted - and it was accepted! The 2014 crash damage repairs have been finished and painted. Seven years worth of neglected and ignored cosmetic flaws have been mostly fixed. The battery and some fuel are back in it - it'll get fired up and ridden a little one last time before it gets retired. It sometimes seems like a waste just to park it when it is so much fun to ride, but that would be time and money from the next one, not to mention the possibility of getting too enthusiastic and crashing the old one again.

The racer was loaded in a van and driven about 1400 miles to the show. The weather was perfect, the guests were a lot of fun, and the judges were very enthusiastic. No trophy this time, either, but the experience was priceless - there's no better show in the USA. After the show ended and the field cleared out a bit, the racer was fired up and ridden back to the van. That was a short, slow, yet very satisfying final ride. 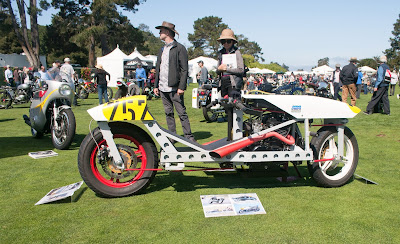 And that's the end of that project - on with the next one.