Day at the Museum...

The racer has spent almost 3 years stuck in the workshop, welcoming me every time I walked in the door. While it still is an unusually amusing sight, it isn't otherwise doing me a whole lot of good. The original plan of parking it in our living room seemed like an increasingly bad idea - a split level mid-century house, oddly enough, isn't optimized for motorsports displays. What about loaning it to a museum, so others can marvel/point and laugh at it? A call was made to That Big Motorcycle Museum in Alabama - the word "Loaning" didn't get finished before the other end of the line snapped back a snotty "We only accept donations - on OUR terms - NO LOANED MOTORCYCLES!". Oh, really: Not at my current net worth.

So the next call went out to the nearby St. Francis Motorcycle Museum. I asked if they were interested in displaying an experimental homebuilt roadracer. They said they would be interested - if it is something different. This sure sounds like the right place!

Last night, the racer was loaded up in the van and rolled in through their front door this morning. Would the spot between the ELR and unmolested R90/6 be OK? Oh, yes. 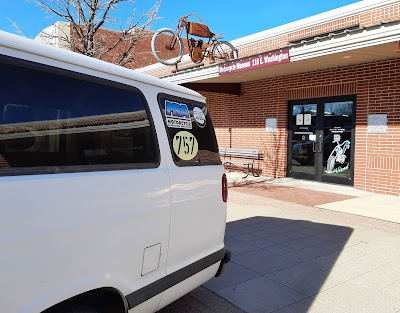 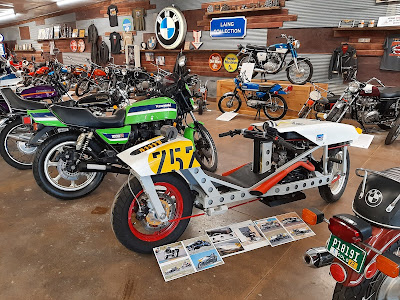 The museum opened up in 2016 - it isn't on the usual internet lists of motorcycle museums, or at least not yet. It is run by enthusiasts - and it shows. No idea how long my old racer will be there - if all goes well, I'll retire not too many years from now and it'll end up in someone else's living room, office, or . . . museum.

In the mean time, the next racer is in that stage where lots of work has been done, but it doesn't look that way - just an increasing spread of small parts waiting to become one big part. Boring, indeed. 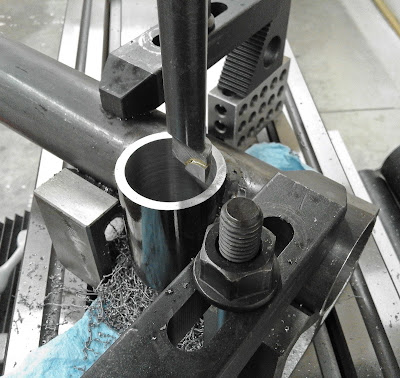 That's one of the wheel uprights - one of two welded assemblies of 6 machined 4130 tubes each that gets finish machined after welding. It is far more work than the similar bolted-up solid aluminum one at the back of the last racer, but the new ones weigh less than half and look a lot better (Yes, that matters!). A fiber wound forging would look even better and weigh even less - not happening with the resources at hand. The last racer's rolling chassis assembly weighed 290 lbs - if the next one can get down to 190 lbs, we'll be in great shape.
Posted by rohorn at 5:28 PM