When the decision was made to build the last racer, the first 3 thoughts went through my head:

1) It was. And it was worth it!
2) It was. More fun than anybody else knows!!
3) Far less than I expected in the real world - virtually none, really! And then there's Facebook and Youtube:
1) Motorcycles, at operating speed, are not balanced by the rider - they don't fall down on their own. There are plenty of videos out there of riderless roadracing motorcycles rolling right along without anybody balancing them. Sure, at low speeds, such as waiting in line for tech, stopping at the grid, or heading back to your pit, the rider has to balance the bike. But at operating speed, a motorcycle is a dynamically stabilized system, NOT an "Inverted pendulum" or static unstable object like a broom.
2) Considering the liquid cooled twin cylinder engine, 2 wheel steering, no steering head, virtual hub center steering front suspension, remote mount handlebar, and reclined seat and rider position, there are more differences than similarities. OK: The 'Gator was the only recumbent motorcycle to get any decent coverage in this country from the legacy motorcycle media this century.
3) Crashed at medium speed early 2013 - crashed at high speed later 2014 - didn't die either time, as far as I can remember. And if you are colliding with stationary objects at the track, well, you're doing it wrong - roadracing in this century is not for you - stick with video games.
4) No, they do not. Or at least they don't if teflon lined rod ends are kept out of the system. Even quite  a bit of play is better than a little bit of binding - the play will only be noticeable when parked - while cornering, there is a load on the handlebars (That's where feedback comes from!) taking up any play that might exist, leaving that crucial front end feel completely intact.

Front end feel comes from changes in the steering load - a little change means a lot. NOTHING kills that feel more than having the rider's weight on the handlebars while trail braking. With a recumbent motorcycle, the handlebars are just that - bars for the hands - the level of feedback from the front end is amazing if there is enough trail to provide it. Hub center steered front ends often need less trail for stability, which also makes the steering lighter, but that also reduces front end feel - something too often blamed on "All those linkages".
Another change in perception comes from the effects of stiction - a binding telescopic fork (There is no other kind) functionally feels rigid and "Transmits" feedback very clearly. A rigid fork also loses traction very easily. What too many perceive as "Signal" from the front end is actually "Noise". It is too easy to confuse the absence of noise with a loss of signal; the lowest level signals were lost under a high noise threshold all along. Confidence in the front end shouldn't come from noise, but apparently, it does.
Speaking of feel: Nothing else provides a better level of feedback than a riding position that spans the wheelbase - any change in traction and/or yaw shift is immediately felt.

No, you won't read or hear any of that from the moto-infotainment outlets. They have no experience with the subject, nor do they want any - disapproval from their old chums and even older audience will keep it that way. Breakthroughs only happen by testing new ideas in the real world, not by consulting the peripheral noisemakers.
5) Yes, my line of sight while riding straight and level is quite a bit lower than usual - yes, that changes one's perspective quite a bit - one gets over it very quickly with some seat time. But when leaned over, my line of sight is no lower than usual - look at how high the rider's helmet is from the track when he's dragging his elbows. If you ever need to sit up higher to see where you're going on the track, again, you're doing it wrong - roadracing in this century is not for you - stick with video games.
6) WRONG! Calisthenics are part of the operation of current racing binary unicycles, but single track vehicles designed to use both wheels full time are steered with the handlebars.
7) Functional suspension works better than standing on the pegs - or at least it does on paved racetracks. That reclined seat and rider position makes spinal injuries from bumps nearly impossible anyway.
8) They are banned by the ACU - read "Road Racing Standing Regulations 2022", section 15.6.7 .
The FIM rejected Morbidelli's request to race one in the Grand Prix classes.
That leaves USA club racing and track days - I'm more than happy with that.
9) Akira references really are fun! A friend made me really cool race team logo from "Bartkira" many years ago. The movie bike is wonderful art for fictional anime/manga, but, sadly, terrible design for the real world. But unlike too many hopelessly unfinishable Akira copies, my old racer was finished, tested, raced, and it worked. 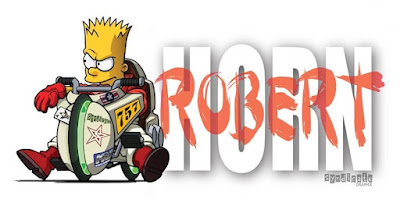 Yes, I terminated my Facebook account back in August 2021. Only in social media is ignorance considered an uncorrupted form of wisdom. There are no negative consequences for stupidity there. Thankfully, Youtube gives me the option of reviewing comments or turning them off completely.
I still find a great deal of enthusiasm online from what I call the "Enthusiast Motorcycle Media" (As opposed to the "Clickbait Motorcycle Media" and "Legacy Motorcycle Media"). More about all that happy stuff was published in a fun interview at Bike-urious - thanks, Abhi!
Posted by rohorn at 5:59 PM